Angel, my REVERSE HAREM book, is now available in Paperback!

WOO HOO! Now you can grab Angel, the first book in my brand new REVERSE HAREM series, The Sacred Oath Series, in paperback! 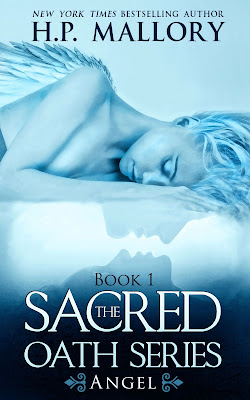 I can't decide which of the three hunky heroes is my favorite! Who is your favorite?

Want an excerpt? Here you go!

Dragan,
The King of Shadow

I take a step away from the beautiful woman, intent on leaving both her and the annoying sprite, but something pulls me back, as if invisible arms are pushing me to her. The shadows within me are pulling, struggling to maintain their grasp on the unconscious girl. I can feel them wrapping their tendrils of dark mist around her, holding onto her tightly.
“Bloody hell,” I grumble under my breath as I realize I can’t leave her here, though I also can’t say why. A woman has never had this effect on me.
I wrap her in the bed linens. As soon as I touch her, though, something happens. I feel power pulsing through her tiny body. It envelops my hand and weaves up my arm, into my chest and causes my breath to freeze. It feels like a legion of ants dancing over every inch of my skin, but the energy is beneath my skin, not on top of it, thrumming and crackling electricity.
I pause momentarily, surprised. There’s strength in her. Power. Yes, I can detect the Atacomite, as well. Anona gave her a hefty dose, no doubt to keep her immobile and, as such, an easy victim. But there’s something else, just beyond the Atacomite. By touching her, I feel my own magic begin to boil up as if it answers her silent call. But this time, the shadows aren’t trying to force me to take her—they’re responding to her, stimulated by her, drawn to her.
I can’t explain it, but I feel captured by her, by the magic that undoubtedly flows within her.
“Didn’t I tell you she was beautiful?” the sprite asks. His voice snaps me out of whatever trance I’ve fallen into.
“No, you didn’t,” I respond, throwing her over my shoulder. Using the Arcane Magic that’s part of me, I imagine everything surrounding me in black. Then, I whisper the words to allow myself to become invisible in the eyes of those who would perceive me.
Blind from sight.
I imagine myself fading into the darkness around me, becoming one with the shadows, one with Shadow Magic that infiltrates me—that is me.

###
Cambion,
The King of Nature

The last thing I recall is healing the beautiful angel. Beautiful, but powerful in a way I find myself wary of. Angels and fae are friends, yes, but Variant is also an angel and we all know how that story ended.
Angels are beings of light, but they aren’t immune to corruption. And I know their proclivity toward decadence and greed better than most.
Then, I remember the visions the angel had...
First, the sex. A not-altogether-unpleasant visual. It was more than a vision, though. Like a dream, the sensation—phantom, but present—has arrested me and now I can’t stop replaying it.
I don’t trust her. And I don’t trust the vision, either. In fact, the more I think about it, the more convinced I become that she’s after something. Women, I’ve found, are manipulative, and the smart ones understand they possess what every man wants. This one is no different. I’m more than convinced she’s using her extreme beauty to seduce us. And, so far, it appears to be working.
Well, at least on Dragan.
Yet, I, too, find myself craving her, the way an Atacomite addict craves his poison. But I’m not satisfied that this desire originates from inside me. Instead, I wonder if I’ve been enchanted. Dragan definitely appears to have been completely bewitched, because he can’t take his bloody eyes off her for more than a few seconds. The barbarian is too stupid for his own good.
I can’t deny there was attraction between the angel and me from the onset. I know that much is true. But the ferocity of my need and my inability to curb it fills me with concern. I’m not a man who obsesses over a woman; I’ve never been that type. I’m too rational, too logical of mind. And yet I can’t stop thinking about this woman—a woman I don’t even know.
She’s placed falsehoods in my mind, I’m sure of it. And these lies are confusing because they feel like the truth.
Then it was a vision of the future, perhaps?
If it’s a picture of the future, I worry about the implications of participating in a destiny I didn’t help dictate. In general, I’m a planner. I’m not like Dragan, who lives according to his impulses. Instead, I weigh all things and act accordingly. I don’t like risks.
And the feeling I had when I witnessed our sexual tryst was that I had no control over myself. Yes, I was in control of penetrating her, but she was the one who maintained the power. It’s difficult to explain, because I hardly understand it myself, but I felt as if I were her captive—as if I was incapable of denying her… anything. I felt helpless against her female charm. It’s a feeling that’s visited me in wisps since I’ve laid eyes on her.
Her beauty is undeniable, but it’s her power that concerns me.
I’ve seen first-hand the hold she already has on Dragan and I won’t allow myself to become her second casualty. Where he sees an injured doe in the woods, I see an intelligent predator in the midst of setting a very convincing trap…

I watch as Dragan lifts Eilish in his arms and carries her to a nearby tree, setting her down beneath it. I wonder about his feelings for her. Of course, he views her as the answer to defeating Variant. But there’s more. He genuinely cares for her. It’s obvious, and it’s something Cambion has noticed, as well. And it bothers him; I can see as much in the fire in his eyes and the crease of his frown.
I don’t envy Dragan. In attempting to defeat Variant, there’s a very good chance the angel won’t survive. Thus, it’s better not to form an attachment to her. All life is transitory and short. It’s one of the first lessons you learn as an immortal—don’t become attached to those with short lifespans. It’s simply a prescription for pain.
Eilish sits, her eyes fixed on Thoradin as he begins to build a fire. I approach and take a seat beside her. Dragan’s eyes are on me instantly. He doesn’t trust me; that much is obvious. But he really doesn’t trust me with the girl. Little does he know I’m uninterested. Yes, I find her as beautiful as everyone else does. But physical pleasures are of little interest to me. The only emotion that drives me is revenge.
I walk far enough that I can still see the light from their fire, but no longer hear their voices. The silence around me is comforting, and I feel myself begin to relax somewhat.
The constant squabbles and dissension between them is distracting and irritating. I’ve been on my own for so long, I find company both disagreeable and tiring. Their constant chatter fills my head and I can’t concentrate on anything. But that’s not the only reason I seek my solitude.
I don’t like the way I feel around that angel. I don’t know if it’s her light that appeals to the darkness within me, but being around her does something to me. It’s almost as if I can feed from her energy. As a vampire, I require sustenance from other beings, something which usually comes in the form of their blood. But with her, it’s different.
I note with interest that I haven’t fed since I met her. And, what’s more, I don’t feel the pangs of hunger. I feel satiated, content, even without nourishment. I don’t understand how this can be.
Perhaps I’m feeding from her life energy? I consider. It doesn’t seem far-fetched. If I am, in fact, feeding from her lightness, I know it’s from her alone. Being around Cambion does nothing other than vex me. Furthermore, I’ve been in the company of creatures of light before and I’ve never felt anything like this.
When I’m in proximity to Eilish, I feel energized, full of life, even. My spirits are improved and this constant darkness that suffuses me seems less… dark, somehow.
It’s dangerous, I think. It’s the type of feeling one could become addicted to.
Not me, I argue with myself. I’ve experienced too much darkness ever to succumb to the light. I’ve known misery and pain such that none other has. It’s been the entirety of my existence. And I’m nothing other than a death dealer. There’s no place in me for lightness.